Search tabs in firefox with %

Here's something I'm using a lot.

If you type % in the location box, you can search among your open tabs.

This is really useful when you've got a lot of open tabs.

So if I want to find that usps tab, just type "%usps" for example, and it will show it in the drop down list.

One of the best things to know with Ubuntu and multi monitors is to know the shortcuts to move windows from monitor to monitor.

Shift+Windows key and arrows will move a window to a different monitor (in the direction of the arrow).

I guess Ubuntu's term for the windows key is Super, so Shift+Super+arrows.


My TV tends to shut itself off during power save so instead of turning it back on, I'll just shift the window I need back in view.


It beats typing "alt+spacebar then down arrow then down arrow and enter" to activate the window move operation and then using the mouse or arrow keys to bring it back into view.

I've been using ubuntu for years without knowing these useful keystrokes.
Posted by PT at 6:29 AM No comments:

I had a couple of golf pencils that broke in half that exposed the lead inside. It's a 2mm lead so it doesn't fit anything, so how to use it? 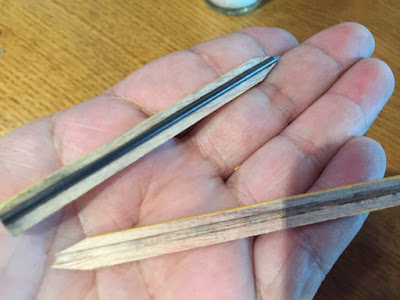 At the Dollar Tree, they sell these neat colored pencils that use 2mm leads.

I thought, they're 2.0 mm so why not see if the lead fits, and sure enough it does. These pencils have a sharpener in the top so you can sharpen the tip of the lead.

So just break a golf pencil in half for a new lead. 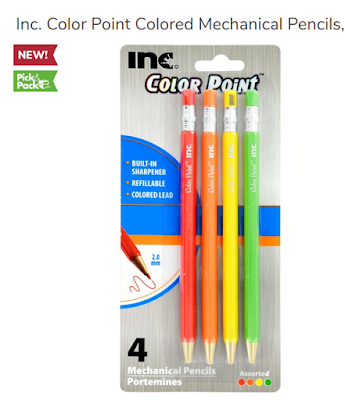 
I got this Lenovo dual dvi usb 3.0 dock and thought I'd see if I could get it running with my Ubuntu 19.10 laptop.

After getting the drivers from displaylink, I gave it a try. What I noticed was that I'd get weird pointer trails and the display wouldn't update perfectly.

I hooked up my 50" tv to the DVI on the dock with a DVI to HDMI cable. But half the time I'd activate the TV, the computer would just freeze.

I gave up on it for awhile, but then realized that if I had the TV on when I started up the computer, everything was fine, no pointer trails and no crashes. 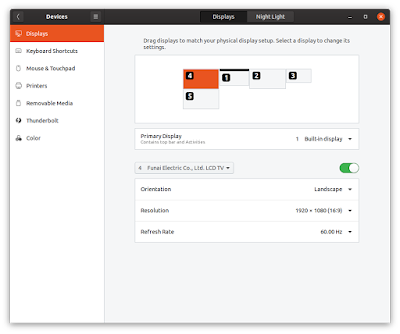 5 total monitors works pretty nicely. Just remember to have the monitors on the displaylink turned on when you boot.

The only thing that's irritating now is that when I boot with the dock, ubuntu switches the audio volume controls to the dock. I still get audio output from the laptop but I can't control the volume until I set the audio output back to the built-in. It'd be cool to be able to "lock" the audio to a specific output and prefer that setting.

Also TVs tend to shut themselves off when they have no signal from power saving, and every time I turn the TV back on, the video system detects this and all the screens go black for a moment. Here's another case where it'd be good to have a mode where it wouldn't try to do anything when a new monitor gets detected, just leave things the way they were.
Posted by PT at 4:27 PM No comments:

I was fiddling with the Java IDE Jgrasp on Ubuntu and one of the things that had been driving me crazy was the setting for "focus follows mouse".

No matter how careful I am, my mouse would end up drifting into some other jgrasp pane and my typing would be lost.

I finally found the setting for it, hidden under the menu Settings/Desktop/Focus Follows Mouse and it was unselected.

This was a little baffling so I checked it and unchecked it. That seemed to fix it. Yes!

One of the things I really liked to do was to set up my keyboard's Tools Key to put the computer into suspend. On my dell keyboard (y-uk-del1), the Tools key is a special key that has a little Music Symbol on it.

But after upgrading to Ubuntu 19.10 the Tools key will now bring up the settings window. So what to do?

All I had to do was to set the shortcut to Super+Tools which did the trick, or find another key to do it. There's a special "Home Page" key on the function row that works as well.


I wanted them both to do the suspend action but you can only assign a single shortcut key, so why not create two custom shortcuts, one for each key. 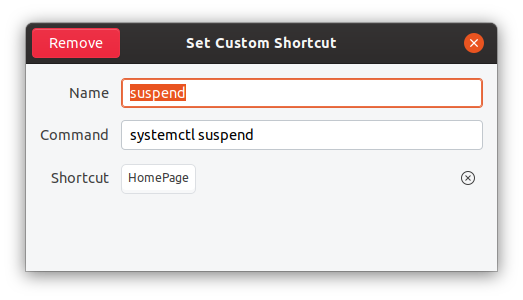 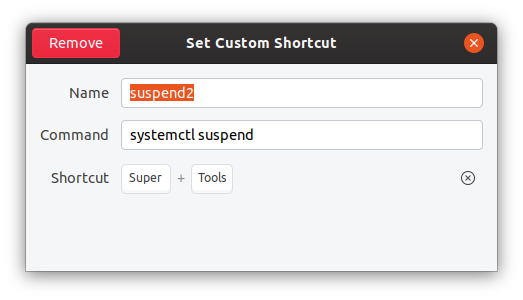 Also I discovered that you can put the computer into suspend by holding down the mouse button over the power button in the System Menu. Then the power button changes into a pause symbol. Holding down alt also works to choose suspend instead of power off. 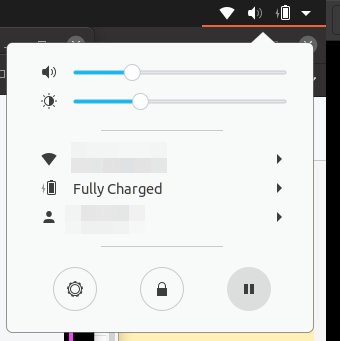 Fiddling with the Matrox DualHead2Go on ubuntu

I saw one of these on ebay so I thought I'd give it a spin. I got the dualhead2go digital edition which has VGA input and dual DVI outputs.

If you don't know what a DualHead2Go is, it takes a video signal in and splits it across 2 monitors, effectively giving you an additional monitor out. The catch is that your computer video card must output a very high VGA resolution, 3840x1080 if you want dual 1920x1080 monitors.

These are all of the different resolutions supported by the DualHead2go: 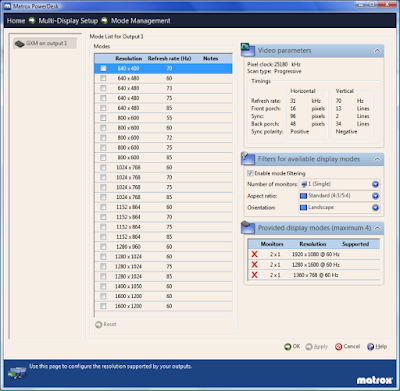 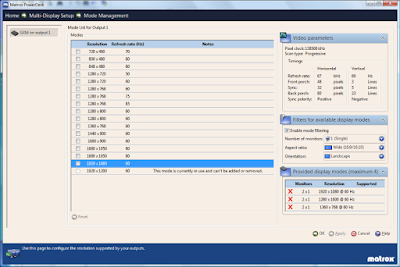 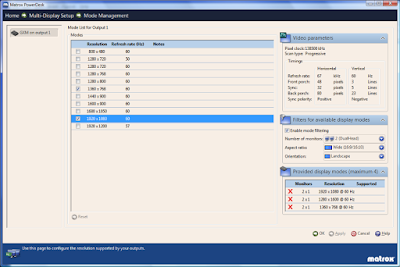 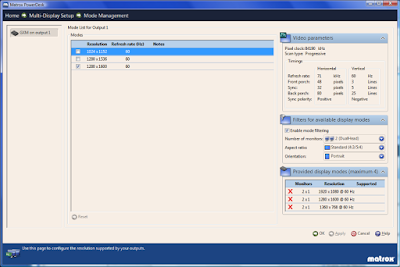 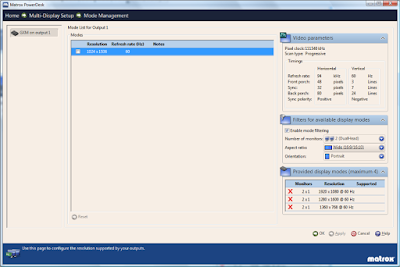 There's a limit of 4 settings that you can preset. These will show up on the matrox's EDID. 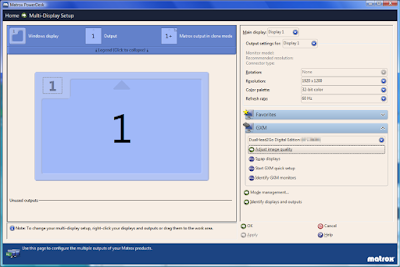 I used an old windows vista machine and installed PowerDesk to set the settings on the box. It wants a good signal going into it so I left my ubuntu system plugged into the VGA generating a signal, while the USB was plugged into the windows vista box. If there's no VGA signal going into the box, PowerDesk won't let you set the modes in the mode management settings. As long as there's a signal, even if it's not originating from the vista box, you're fine. Once you've programmed the settings on the box, you can disconnect the usb from the vista box. You do need to plug in the usb to a usb port to get power.

So the big problem is one of getting a VGA signal of sufficiently hi-res, namely 3840x1080. My laptop with ubuntu 19.04 and intel graphics would only do 2720x768. What about another machine?

I installed Ubuntu 19.10 on another system with an Intel(R) Core(TM) i5-3470 CPU @ 3.20GHz. The integrated graphics would come up at 3840x1080 but for some reason, the acceleration was nonexistent. It was so slooooooooow, the system was running but it was slow. I did have an idea, why not try wayland? Selecting wayland at the boot screen came up fine with acceleration. Awesome.

There's also an AMD Cedar graphics card in this system, and strangely it wouldn't go higher than 2720x768. 3840x1080 would give me a black screen. Oddly, booting this same system under knoppix 8.6.1 livecd would give the 3840x1080 resolution on the AMD Cedar.


One of the things about an ultrawide screen is that youtube fullscreen is problematic, since it splits it across two monitors. I wish that fullscreen could be setup to go to the left side or the right side of the full double-monitor.

Adjusting the image quality needed a "special image" so I made my own in gimp by hand. It's an 3840x1080 image of alternating black and white lines.
Once I made this image, I just viewed it in fullscreen with eog, hitting f11 to go fullscreen.

The full image doesn't come through with blogger's image system, so here's a piece of it if you want to make your own 3840x1080 by stitching: 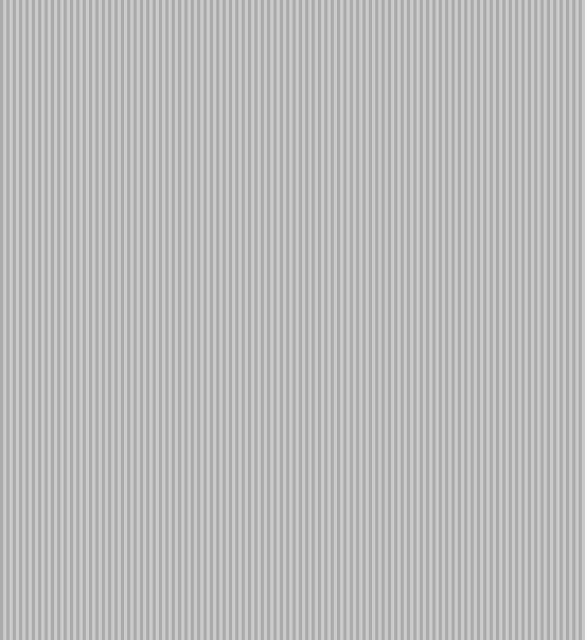 I tried to snapshot the image display when PowerDesk would overlay the desktop with the alternating lines, but the PrintScreen key would just give me the normal desktop. I don't know if my version works as intended but I hope it does.